A Southerner’s View on Groundhog Day

February 2, 2011 | Comments Off on A Southerner’s View on Groundhog Day

As natives and longtime residents of the Appalachian Mountains, the staff of Mountain Made have always been a bit perplexed at all the fuss and bother made over groundhogs (also called wood chucks or “supper” in certain hollows in Western North Carolina).

We are no stranger to seeing slow moving groundhogs waddling along the grassy banks alongside our roadways. 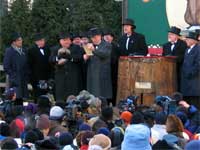 Or worst yet, setting up housekeeping in the middle of our flowerbeds and gardens!

To many Southerners, a groundhog is a pest animal and all this mess of him sticking his head up to check out his shadow is a sure way to have the animal control people called down on him!

But obliviously folks in Gobblers Knob, Pennsylvania look at things a bit differently (and to think people make fun of our local Southern names like Sandy Mush or Maggie Valley!).

For over 125 years now the Punxsutawney Groundhog Club have annoying some poor woodchuck at the break of dawn. Making enough noise until he comes out of his man-made burrow so news crews can take his picture and report on his so-called weather predictions.

Legend has it if a groundhog, in this case one that goes by the name of “Punxsutawney Phil”, sees his shadow there will be 6 more weeks of hard winter weather. But if he does NOT see his shadow, the rest of winter will be mild and there should be an early spring.

We are not to sure about this because according to the National Climatic Data Center good Phil only has an accuracy rate of 39 percent. We know lots of folks with “cold weather knees” that do better than that!

Of course this percentage is hotly deputed by the record keepers of the Punxsutawney Groundhog Club, official “owners” of Phil the groundhog, who claim he is 100% right all the time!

But these Yankees also claim that there has only been one Punxsutawney Phil too! They say every summer  Phil drinks a “magic elixir” that gives him such a long life.

Well even us urban-hillbillies here in Asheville know woodchucks only live about 8-10 years, let along 125! And we have talked to our local Wiccans here about and even they know nothing about such things!

Besides, who would believe grown adults who have run a clubhouse since the 1890’s that’s only purpose seems to be worrying about what a groundhog sees once a year?

Foolishness, we say – but we do know what to with a blasted groundhog in the cold winter months – eat’em!

So here is another great recipe from Johnnie Sue Myers, Native American cookbook, “The Gathering Place”.

She shows what a true mountain mother and Cherokee woman can really do with a pesky wood chuck.

But don’t worry when you get your copy, she also has many other Southern favorites included such as Ham with Red Eye gravy.

Place the cut up ground hog into a pot of water, enough to cover the meat, into this put your sticks of spice wood and bring to a boil. A large quartered onion with black pepper may be used in place of spice wood.

This process is used to eliminate the gamey taste found in wild meat. Cook until tender, drain off water and sticks or onion. I usually wait until the meat is cool and rinse the meat removing any bark from the spice wood.

There are a couple of ways that this meat can be prepared, frying or baking with or without barbecue sauce.

FRYING
Place about 3 tablespoons of extra virgin olive oil into a fry pan or skillet. Heat on medium high you want the oil to be hot not smoking.

Roll the meat in flour seasoned with seasoning salt, paprika, pepper and just a small amount of salt (teaspoon). Place the floured meat into the skillet, fry until nice and brown. The meat is precooked so all you are doing is browning. Turn once, do not mash while browning.

BAKING
Preheat oven to 375 degrees. After placing the meat on a pre sprayed cookie sheet, spray the meat with extra virgin olive oil, and place on top rack of oven turning once to brown both sides.

To barbecue turn the oven to low broil. Place on broiler rack, remember to put a cup of water into the broiler pan. Brush the side facing up with barbecue sauce and place on top rack to brown, turn and brush the under side and brown…