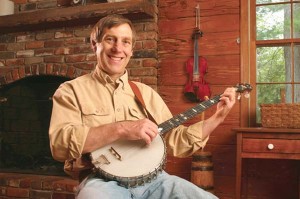 In 1973, Wayne moved from his home on the West Coast to North Carolina. His goal was to dig deep into the roots of Southern Appalachian music by learning from the masters.

Realizing that the true Southern Appalachian music was on the verge of becoming extinct, Wayne was determined to ensure that this music was preserved and passed on to future generations.

After studying under the watchful eyes of such gifted musicians as Charlie Monroe,  Tommy Jarrell and many others, he began teaching banjo classes to interested students of all ages.

Wayne wrote up his music lessons and self-published under the title, “A Manual on How to Play the 5-String Banjo For the Compete Ignoramus!”  This first book sold out in a matter of weeks.

Soon Wayne followed it up with other bestsellers such as the “Bluegrass Banjo From Scratch”, then “The Complete & Painless Guide to the Guitar for Young Beginners”, and finally “The Backpocket Old-Time Songbook” and  “The Backpocket Bluegrass Songbook”,.

Many of Wayne’s wonderful books and Appalachian music CDs are available for  right here in the Mountain Made store .

Wayne will be here for our 1st Old Fashioned Wing-Ding in April. He is going to provide us with some live music from his favorite banjo pieces, as well be available to sign autographs on his CDs and books.

Remember to come by and visit us!